Another Day in the Park 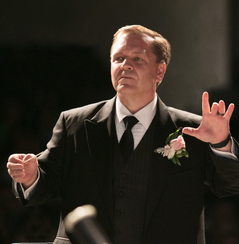 Program Note - The story behind the music

I have tremendous respect and appreciation for Steven Hendricks. Early in the composition process, even before I began sketching musical ideas, I spoke with family, friends, and alumni in an effort to learn more about Steve. What I found out rather surprised me. Rather than talk about the plentiful awards and honors the Davis High School Band has received in the past 28 years under Steve's direction, almost all the comments revolved around his concern for individuals. Steve's daughter, Tarah Crookston, said, “Dad is much more concerned with people than with music. Music is just the happy by-product. He genuinely cares about people and will easily spend hours with them outside of rehearsal.” Alumni are often heard to say things like, “He is really running a youth leadership camp more than a band camp. He just wants people to be connected to the world and feel fulfilled and happy.” I am so inspired by band directors like Steve and feel honored to have been asked to write this work to commemorate his retirement.

Dan Chaston, the organizer of the consortium commission, agreed with my initial thoughts that this work should be a celebratory “party” piece rather than a serious, nostalgic work. Steve is always smiling, always energetic and positive, and Dan and I felt that something upbeat and fun would be reflective of Steve's personality. One day, during a phone conversation with Steve, we discovered we have a shared love for the classic rock band, Chicago. I immediately started sketching ideas taking inspiration from the sound and feel of some of mine and Steve's favorite Chicago songs. The title for this work, Another Day in the Park, is borrowed from the second verse of Saturday in the Park and I feel aptly represents the upbeat, positive personality of Steven Hendricks. I would like to thank all of the consortium members and especially Dan Chaston and Steven Hendricks for their support of the creation of this work.