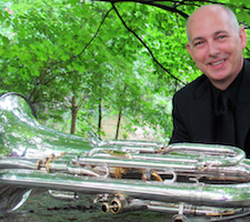 Kenneth Kroesche is the Doris & Paul Travis Professor of Trombone, Euphonium and Tuba at Oakland University in Rochester, Michigan.  He holds a master's and doctorate of musical arts degree in performance from the University of Michigan, in addition to a Bachelor of Music Education degree from Texas State University.

Dr. Kroesche has appeared as a euphonium soloist with a number of notable ensembles, including a guest appearance as a concerto soloist with the National Symphony Orchestra at the Kennedy Center for the Performing Arts in Washington, D.C. This honor was the result of a competitive nationwide audition sponsored by the orchestra and their music director, Mstislav Rostropovich. The Washington Post's review of this concert described him as "an expert on the instrument."  He currently serves as the principal trombonist of the Oakland Symphony Orchestra and he is the solo euphoniumist of the Five Lakes Silver Band.  Each summer, he performs as euphoniumist with the Toledo Symphony Concert Band and as a low brass player frequently performs with the Detroit Symphony, Flint Symphony, Toledo Symphony and Detroit Chamber Winds.
Questions can be directed to:
Kenneth Kroesc﻿he, kroesche@oakland.edu﻿
Benjamin Taylor, benjamintaylormusic@gmail.com