Shipbreaking, for alto saxophone and live electronics, was selected as a finalist for the 2013 ASCAP/SEAMUS Student Commission Competition.  The piece will be performed by Zach Herchen at the SEAMUS national conference on April 19, 2013. Listen to performances by Zach Herchen or Corey Dundee. 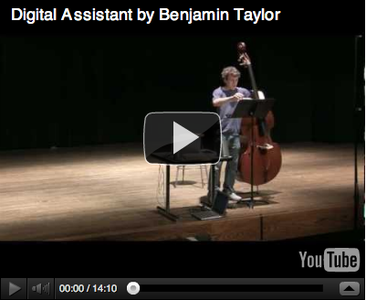 Digital Assistant was commissioned by Cody Takacs and premiered in April 2012. This piece combines live contrabass, electronic sounds, and theatre in a unique and lighthearted way requiring the bassist to act, speak, and perform extended techniques on the bass that are outside of the normal repertoire. This composition offers commentary on contemporary art music, electronic music, modern technology, and modern contrabass performance practice.

The Toledo Symphony Youth Philharmonic Orchestra and the Detroit Symphony Orchestra Civic Philharmonic have jointly commissioned a new orchestral work by Mr. Taylor to be premiered May 12, 2012 at Orchestra Hall in Detriot, Michigan. Another TBD performance will occur in the Peristyle Concert Hall in Toledo, Ohio. Both youth orchestras are directed by Kenneth Thompson.

The Bowling Green State University Trombone Choir, under the direction of Dr. William Mathis,  has commissioned Ben to compose a new work for their performance at the Ohio Music Education Association Conference on February 17, 2012 in Columbus , Ohio.

First Punch, for contrabass and electroacoustic sounds, was selected for performance at Electronic Music Midwest.and Electroacoustic Barn Dance.  Will Hack performed the U.S. premiere at EMM in Kansas City, Kansas on September 30, 2011 and Scot Fitzsimmons performed the work at EABD.

Benjamin Taylor was named a winner in the 2011 ASCAP Foundation Young Jazz Composer Contest for his composition High Road.

French contrabassist Yann Dubost, commissioned Ben to compose to a work for contrabass and electronics titled First Punch for premier performance on February 20, 2011 at the Espace Multimedia Gantner in Bourogne, France.  A second performance ocurred within the musical season of the Ensemble I'Itinéraire in Paris, France (Auditorium St-Germain), on March 1, 2011.

The Omaha Symphony selected Mr. Taylor's composition "Leap" as a winning entry in the Omaha Symphony Symposium in June 1-3, 2010. He was one of six composers offered a position as an auditor. Joseph Schwantner was the composer-in-residence.
Click here to listen to "Leap"

Recent Honor/Performance- "Go Now! You MUST Go Now!" has been programed on the International Double Reed Society (IDRS) 2010 Conference!  It will be performed by Jacqueline Leclair and the Bowling Green College of Musical Arts Oboe Quartet on June 22, 2010.  This piece is being distributed by Trevco Music and Gail Warnaar music.  Click below for a direct link to the piece on Trevco Music's site. 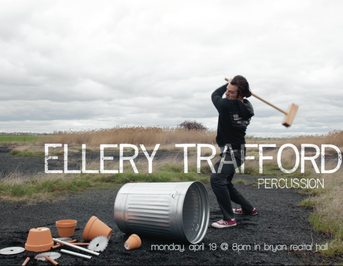 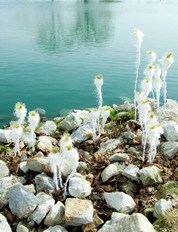 Ben collaborated with Mike Yeager, a visual artist who designed and constructed several of his own instruments.  Mike's work was featured in an exhibit running for two weeks starting on April 23, 2010 in the Bowling Green State University Art Building, Main Winkleman Gallery.  A  live musical performance took place incorporating Ben's music and Mike's instruments on Friday April 23, 2010 at 7:00PM.